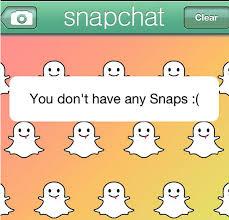 The idea behind this app seems to be somewhat counterintuitive.  They say a picture is worth a thousand words, this is a Kodak moment, and capture this moment forever… yet Snapchat seems to be built to accomplish the opposite.  In fact, it only allows users to view a photo long enough to come up with maybe – 458 words, often is used to capture "non-Kodak moments," and only captures a moment for only a matter of seconds never to be reviewed again.  Yet there is a certain appeal of this to its users.  It allows a level of leniency for users to take and share photos that they may not otherwise for fear of its lasting effects.

The application was developed by four students from Stanford, and by definition, Snapchat is a photo messaging application with which users can take photos, record videos, add text and drawings, and send them to a controlled list of recipients. Senders set a time limit for how long recipients can view the photos, ranging from 1 to 10 seconds, after which, it will be deleted from the recipient's device and the company's servers. Currently, the primary user base is between the ages of 13-25, though the number of older users is rapidly growing.

The whole idea sounds strange, and with my experimentation with the app, I have found that a majority of photos shared aim to accomplish one goal; making the ugliest/goofiest/funniest face possible.  Pull your face back and try for that triple-chin while you cross your eyes and stick your tongue out.  Most people would not want to share a photo of themselves doing such a thing on Facebook or Twitter due to its availability of viewership and lasting impressions, yet with Snapchat, users have the ability to control who sees the photo – and most importantly, for how long.  This provides a level of comfort when sending a photo knowing that it will only be seen by others who you are comfortable with, and can only be seen once, for a matter of seconds ensuring that it will never resurface to embarrass you.

The app can become entertaining and increasing the depth of a message.  It adds a dynamic to photo messaging which can build excitement and invites users to exchange back and forth.  Being that this is a social network, it is much more fun when you are using it with your closest friends, the ones who will not judge you, regardless of what photos you may or may not send.

Criticisms:  Many parents have expressed concern with the app because it almost seems to promote sharing photos of risqué or otherwise irresponsible activities. While the app was first gaining popularity, it was coined by many as a "sexting" app, perfect for sending photos of one's possibly exposed self to others. While there may be some truth to this, the problem is that a screen capture is still possible.  When a recipient captures a screenshot, the sending user will be notified, but there is nothing more the sender can do now that the photo is captured potentially forever.

Final thoughts: Download it, and try it.  It's fun, it's funny, it's an invitation for the unexpected.  But don't get yourself in trouble – enjoy the freedom and comfort to act goofy and have fun via photo messaging. A recent tweet declared: The uglier the Snapchat, the closer the friendship. #Truth