The U.S. Senate will begin voting on Thursday, Jan. 24 to pass legislation on two bills: SOPA and PIPA and if these bills are passed, the internet will never be the same. 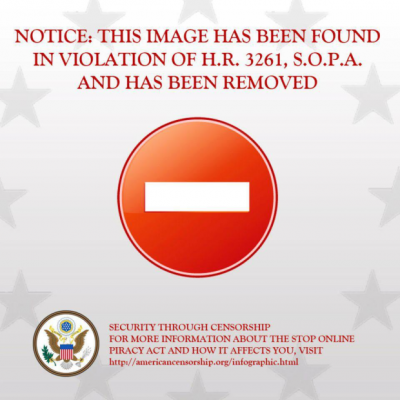 A rolling blackout occurred across the Northeastern and Midwestern parts of the U.S in August 2003. The 50 million people that were affected by the biggest blackout in U.S. history received power again after nearly five days. Fast forward nine years later to Wednesday, Jan. 18, 2012 when a planned Internet blackout occurred. Several websites, such as Wikipedia, Reddit, BoingBoing and even the Erie Reader, blacked out entirely for 12-24 hours while other sites like Google censored their logo and encouraged users to learn more about the cause of the protest.

So what exactly was the purpose behind these scheduled Internet blackouts? They transpired to raise awareness about the current state of the web. The U.S. Senate will begin voting on Thursday, Jan. 24 to pass legislation on two bills: SOPA and PIPA. If these bills are passed, more than 50 million will be affected by the "rolling blackouts" across the Internet.

Still feeling in the dark? Let me fill you in on SOPA and PIPA.

Stop Online Piracy Act, otherwise known as SOPA, and Protect IP Act, or PIPA, are proposed legislations that are working their way through Congress. A Senate committee approved of the PIPA bill in May, which is now pending before the full Senate. If passed and put into effect these bills will crack down on piracy by increasing censorship of the Internet, thus causing an all out war between Hollywood and Silicon Valley. Media companies have united in favor of the bill while tech power houses are voicing their opinion in opposition of PIPA and SOPA.

Here are the pros and cons of PIPA and SOPA, see which side you fall on: Hollywood or Silicon Valley.

Obviously, there is always a risk of content being stolen, copied, and used without permission once it is uploaded to the Internet. However, with the passage of SOPA, the frequency of this occurring would decrease drastically by eliminating foreign websites that exist solely for the purpose of pirating content.

It upholds the American ideals of free enterprise:

A truly free market requires that we all play by the rules. By forcing an equal playing field for all content aggregators and content creators, the Internet can become a fair and productive part of the U.S. economy.

The Internet will eventually need SOME type of regulation:

With cyber bullying and piracy on the rise, the Internet will eventually need some form of regulation. SOPA is the first attempt at this.

SOPA/PIPA does not harm free speech:

Free Speech must be protected:

Censorship, even censoring foreign websites, goes against the American value of free expression. We, as a nation, fight against tyranny and oppression regardless of state boarders. From China to Venezuela, a priority is placed on encouraging nations to avoid censorship at all costs.

It upholds the American ideals of free enterprise:

A truly free market requires that business adapt. For the film, music, and media industries to survive, they will need to find new ways to encourage sector growth. A perfect example of how this innovation can happen is Spotify. By focusing on convenience and ease of use, the company created a platform for music sharing that works for both the consumer and the musician.

Censorship of foreign sites through SOPA/PIPA will cascade into American sites as well:

The American commerce system is already complex and riddled with unnecessary laws. Passing SOPA only reinforces the fact that lawmakers pass laws on topics they barely understand themselves.

The blackout in 2003 stopped trains, elevators, and the normal flow of traffic and life. With only a glimpse of this Internet blackout from protesters choosing to shut down their sites we have to ask, "what will be affected from these sprawling blackouts when the government shuts down websites without warning?" Education, economic growth, innovation, and the future of the World Wide Web will be changed, and stifled, forever if this bill passes. The normal flow of our daily lives will be compromised and our ability to freely connect to the world and impact others will stop.  Whether you are for or against these bills, continue to educate yourself, speak out, sign a petition, or rally in support; most importantly, contact your representative to tell them where you stand on the issue.