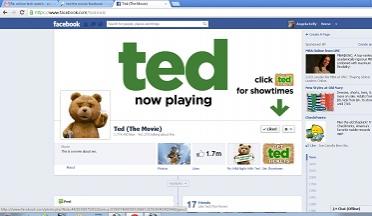 From small independent films or much-anticipated Hollywood blockbusters, it is apparent that the film industry is finding success in using social media as part of its marketing strategy. In the past, Hollywood depended on the star system and fan magazines. Fast-forward to 2012 and Hollywood now has mobile phones with access to Facebook and Twitter to spread the word.

The typical marketing strategy for new films has been to expand to more markets using word of mouth, press, and publicity to push the films forward. Social media platforms allow the studios to use the Internet and find out where an interest in the film exists. Movies are now benefiting from message traffic on Facebook and Twitter, TV, and Web ads rather than their classic form of advertising: movie trailers.

Social media helps establish brands, which typically last longer than films. Since films quickly come and go, from the theater to DVD/Blue Ray, it's important to build up the filmmaker brand. When directors and their marketing team are compiling content for their Social Media, they typically use behind-the-scenes footage, lots of visual content and also a dash of humor.

On June 29, the movie "Ted" debuted in theaters across America, but it was already drawing attention on Facebook and Twitter. By June 14, Ted's Facebook Fan Page already had 500,000 fans, and by June 27, the page reached 1 million fans. As of midnight on July 5, Ted had 1,578,153 likes and 1,179,393 people talking about it on Facebook. So why does Ted have so many fans and such a high number of engagement?

The creator of Ted, Seth MacFarlane, and his writers choose to use the voice of the character on both Facebook and Twitter in first person – much like we suggested in our article for local mascots who should embrace social media. Storytelling is vital to the movie content and the social media interaction. In the example of Ted (mind you the content is for mature audiences only and NSFW), the vulgar teddy bear has been seen using popular Internet memes to promote the movie. These memes include TedeeCards, also known as SomeeCards, and LOLCats. Whatever they have posted on social media has to be a part of the film's storyline, which is simple for this particular film with the new Facebook Timeline. Scrolling all the way back to December 25, 1985, Ted's birthday, through his awkward high school years until current day with his second rise to fame, you can see that the writers committed entirely to keeping his page in character.

However, "The Dark Knight Rises," also saturated in social media and opening later this month, takes a very different approach with their use Facebook and Twitter. They follow a more traditional route, while still engaging with fans by creating the app, "Gotham City's Most Wanted" where users can upload a photo of themselves behind the mysterious Batman mask or other characters from the movie. Their marketing team has also created a handful of Facebook cover photos for their fans to use as their own. They have even had contests on their Facebook, something that we are seeing more local companies do as well.

Both movies also offered a custom tab for their fans to purchase tickets directly on Facebook. With only 902,857 likes and just 166,603 fans talking about "The Dark Knight Rises," it will be interesting to see how the engagement will increase once the movie has premiered, compared to the numbers that Ted saw before the premier.

Since the movies are two entirely different genres, it's difficult to say who has been using social media better, but it is obvious that the interaction between Ted and his Facebook fans and Twitter followers is extremely different from other recent movie releases. Maybe the simplicity of their approach is exactly why Ted has such a high number of followers –or perhaps it is the content with the rude and crude humor of the "Family Guy" creator.

The future of the movie industry is evolving from "Opening Day Ticket Sales" and "Oscars" to "Likes" and mobile apps. Who knows how much engagement "Citizen Kane" may have gotten had it been on Facebook when it was released! As more movies come out during the summer, continue to surf the web and see how they are promoting their movies with the use of social media.