Weekend All Things Erie: The Artist and the Marketer as One

Erie-native Todd Scalise talks Higherglyphics, Visual Public Relations, and What It Means to be a Pennsylvanian Artist 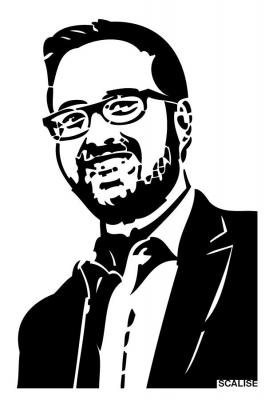 Last week, I announced that I was taking to the airwaves, as I began my stint at the helm of WQLN's Weekend All Things Erie -- a community affairs-based program previously hosted by Kim Young for twelve years.

You may have noticed that on my social media accounts, I've been rockin' a sweet portrait painted by Todd Scalise (the image associated with this story). The reason my avatar's been like that for a couple of weeks now became apparent Saturday, July 12, when my interview with Todd aired.

All good writers will admit that writing about certain subjects can be more difficult than others. Getting someone to hear what you heard at a live-music show or on an album ain't always easy. Nor is getting someone to taste the flavor arrangements you experienced at any given restaurant.

That is, using one sensory experience to describe another is challenging. But it always leaves room for great reward.

Writing about art and an artist's process of creating such art fall into that category. Thanks to Todd, though, those unfamiliar with his work could get a taste of it before tuning to the radio to hear about a visual medium.

Todd's no stranger to the Reader, though. Which is how I got to know him, and, after seeing him work, is why I knew he'd make for an excellent interview -- where we talked about things like the new YMCA mural in downtown Erie, the permanent installation at the Erie Art Museum, his current project at Mercyhurst Prep, receiving national recognition, and more.

And he's illustrated a metric-Sharpie-ink ton of Reader covers (more since this was written, including the Howie Glover cover, where he showed his design talents).

So Todd's no stranger to what we've done at the Reader, and I enjoyed the chance to further that conversation with him to expound on his work with Higherglyphics, the notion of Visual Public Relations, and what it means to him to be an artist from Erie.

In case you missed that episode, you can listen to it here. And if you're hungry for clues regarding what Saturday, July 19's episode is about, I have two words for you: "Unholy" and "Murder." And you might not want to be eating a meatball sub when you listen.

Ben Speggen can be contacted for print-related things at bSpeggen@ErieReader.com, or if you want to chat radio-related items, drop him a line at Ben@WQLN.org. You can tweet with him using @ERBenSpeggen and for Weekend All Things Erie-related thoughts, suggestions, and comments, use #AllThingsErie.