You Ought to Know: Greg Garmon

Garmon started attracting attention after a breakout junior campaign, gaining 8.7 yards per rush on his way to amassing 1,225 yards on the ground and 14 total touchdowns as a two-way starter on offense and defense.  Scouts have been drooling over his breakaway speed and vision, leading to interest from over 20 different schools from such power conferences as the Big Ten, ACC, and SEC.

by Alex Bieler
View ProfileFacebookTwitterInstagramGoogle+RSS Feed
November 16, 2011 at 9:00 AM 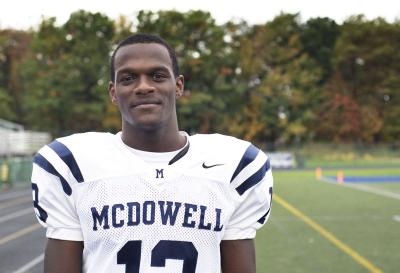 The play starts, setting all the pieces into motion. Slotted out left, the intended receiver bursts off the line, quickly cutting left just five yards down the field. In just a span of seconds, the ball zips out of the quarterback's hand, flying toward the receiver. As the pass's target attempts to make the catch, he accidentally trips himself up and unceremoniously tumbles to the ground as the ball falls incomplete.

The receiver lies on the ground for a short time before bursting into laughter. He pops back up, a smile emblazoned across his face as he dusts himself off before trotting back to join the rest of the team.

This botched play was the first time I witnessed Greg Garmon play in person. Garmon, a four-star running back recruit, has received attention from several Division 1 NCAA schools for his play at McDowell High School the past few years.

After becoming a starter his sophomore year, Garmon started attracting attention after a breakout junior campaign, gaining 8.7 yards per rush on his way to amassing 1,225 yards on the ground and 14 total touchdowns as a two-way starter on offense and defense.  Scouts have been drooling over his breakaway speed and vision, leading to interest from over 20 different schools from such power conferences as the Big Ten, ACC, and SEC.

"Every day on Facebook I'll get 20 unread messages and about 15 friend requests," Garmon said. "It's crazy. People call your phone that you've never heard of. Little kids send stuff  to get signed. I guess I've kind of accepted it by now."

After reading all this, I was a bit surprised to see this potential college star-to-be tripping over his own feet on his first offensive snap in practice. At first grunting from the effort he exerts on every play, the image of Garmon laughing as he retrieves the loose football seems a stark contrast to the practice warrior. In truth, it just reinforced what kind of person Garmon is off the field – someone that works hard on the field, but never takes himself too seriously off of it.

"He's pretty quiet until you get to know him, but then he's pretty comical," McDowell football Coach Mark Soboleski said. "He's a fun-hearted kid, a really good teammate, well-respected kid. The teachers I've talked to always have good things to say about him."

After talking to Garmon for a few minutes, I can believe it. The slender 18-year old constantly has a slight smile affixed to his face, calmly giving me his life story. Garmon has been involved in football since age six, when he starting playing in a city league.

While scouts prize the senior for his speed and playmaking abilities, he didn't start out in a skill position, instead acting as the team's center or tackle. It wasn't long before Garmon realized he preferred a more exciting role.

"I hated those positions," Garmon said. "I always wanted to be the quarterback or a position that could have the ball."

As the years passed by, Garmon got his wish, eventually moving from tight end to quarterback, eventually becoming a running back. While attending St. George Catholic School, Garmon had to decide upon where to go to high school.

According to Garmon, he was originally trying to decide between Cathedral Preparatory School and Strong Vincent High School, but current University of Wisconsin player and former McDowel star A.J. Fenton helped him decide on his destination.

"A.J. told me to check out McDowell," Garmon said. "I shadowed on St. Valentine's Day and I was walking through the halls and the girls would give me valentines. It was really cool, and it felt like the place to go."

Since then, Garmon has let his play on the field do the talking, becoming the game-changing player that has drawn calls from coaches at Ohio State University, the University of Iowa, and even legendary Penn State University coach Joe Paterno.

While the future is bright for the four-star senior, the ride wasn't all fun and games.

Around the age of 14, Garmon learned he had cancer in his left leg, hip, and stomach. The budding football player was forced to stop playing for a full year as he went through chemotherapy.

To make matters worse, just before his sixth grade year at St. George began, Garmon's house had burned down from a spark created by a wire in one of the walls, starting a period in his life where he had to move into several different places, including that of Steve Spearman, his city league coach.

"That was a rough year," Tartesha Lockett, Garmon's mother, said.

Despite the trials, Garmon kept his thoughts on football, even trying to sneak back into the game before he was medically cleared to do so.
"All he was talking about was football," Lockett said. "He loves football. I had to go get him off the field when he was getting chemo. Someone told me, 'Greg had a good game yesterday,' and I was like 'what game?'"

Disallowed football excursions aside, Garmon maintained his easygoing attitude with a little help from loved ones.

"The support from friends and family really helped," Garmon said. "People would bring me food and other things. Someone even brought me a game station. [The whole experience] really made me take advantage of life."

Tyree Spearman, a sophomore teammate at McDowell and son of Garmon's former city league coach that provided him with shelter, said that having to overcome cancer at a young age hasn't changed Garmon.

"He's still the same," Spearman said. "He's a good kid, funny; he works harder than most people. He was like a brother to me."

After having to deal with such trials in the past, the sudden attention from schools shouldn't faze Garmon. While the experience may be a bit overwhelming at times, Garmon has taken it in stride, at least as much as anyone can.

Now, Garmon is just trying to make the best choice for his future.

"It's hard for him to comprehend with all the attention, nobody can, really," Soboleski said. "He's got about 20 schools recruiting him. We're trying to narrow it down to the five or so he really likes."

This means that the Erie native will be leaving the city he grew up in.

"It's going to be hard leaving Erie," Garmon said. "I just got to stay level. Hopefully I'll make it to the NFL someday, but I know I'm going to come back [to Erie]."

Other than trips outside of the city for football, Lockett said that Garmon has not left Erie very often, but she knows that even if he leaves the hometown he knows so well, the game will take care of him.

As the pattern has shown, he'll still be the same easygoing, fun-loving guy that McDowell has come to know.

Football may take Garmon out of Erie, but it won't take Erie out of Garmon.