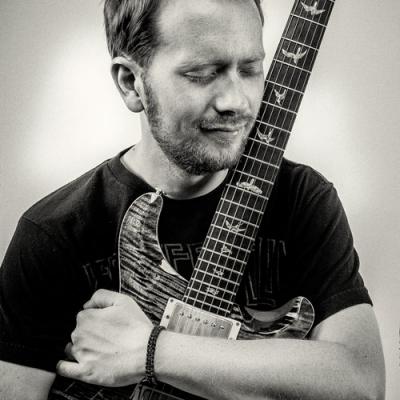 "The playing, the music, and the emotion and feeling I want to create and make people feel is the passion. That's the pursuit."

Ed: When did you first feel musical?

Eric: I had a weird introduction to music. As a kid, I was sensitive to loud noises. When my parents would play music, I'd want them to turn it down. Then, in fifth or sixth grade, a friend of mine showed me how to play a few things on the piano. I was more interested in the task of playing the music correctly than I was in the actual music. I was into hitting the right keys at the right time, like a muscle memory thing.

Drums were my first instrument. I think the appeal was the aggression of just hitting something. But once I hopped onto the guitar, things started to click for me.

Ed: What was that transition point, the leap to becoming a guitarist?

Eric: I think it was from a desire to create and to write a song. After I played drums for a while, my parents got me a little four-track cassette recorder from back in the eighties. I was trying to write my own songs. So I'd play a drum track and would hear stuff in my head. I couldn't play anything else, so I picked up bass. Then I'd say, "Well, I got part of a song. I kinda need to learn guitar to finish it." And once I started playing guitar, everything else went out of the way.

Ed: How did you study music? Did you go to a teacher or just sit and listen in your room?

Eric: Both. I had some really good teachers: Frank Singer, Mike Ohm. I took lessons from those guys when I was in high school. I'd devour what they were giving me. Sometimes I wasn't the best student in high school because I was lazy. I didn't think I'd ever be at a level where I could pursue music as a career. That just seemed so improbable. Not that I thought I'd be famous or on the charts. I just didn't think I'd ever be good enough to even get paid for it.

But I'd also sit in my room and listen to things over and over; just try to find it by ear. Sometimes I'd get exactly what they were doing. Other times, it was a mystery for me – like Jeff Beck. I would know the notes he was playing, but the inflection and the articulation and the tone – I couldn't get anywhere near it. So just learning things by ear was huge, too.

I did go to music school for a couple years, at Duquesne in Pittsburgh. I started out as a music technology/audio engineering major. And I quickly realized that I was not technically minded enough to stay with that. But I took lessons from a couple guys there who are probably some of the most accomplished jazz players around. One was Joe Negri, who was on Mister Rogers' Neighborhood as "Handyman Negri." At probably 80 years old, he hadn't lost a step. He was incredible! So being in that environment helped a lot.

Studying music, I've never had one set agenda. It's exploratory and it's still going. You never learn everything. There is so much more to learn. You hear stuff every day that just blows your mind. It's a lifelong journey.

Studying music, I've never had one set agenda. It's exploratory and it's still going. You never learn everything. There is so much more to learn. You hear stuff every day that just blows your mind. It's a lifelong journey.

Eric: I'd like to think that I've gotten closer to it. There are two sides to that coin. There's your tone that comes from your gear. A lot of guys, myself included, have kind of obsessively pursued the gear side of it. I've got to have this finished Martin or this Les Paul. You can drive yourself crazy chasing that. It's almost never what you're expecting it to be. I'm a huge gearhead. That's kind of my downfall – financially, anyway. I'm always buying new guitars and amps.

I think I've found the gear that will achieve a sound I can mold, and put forth what I want the audience to hear. The more important side is what comes from your fingers, your heart and your mind. And the emotion you're trying to create. That's the more intangible thing. I don't think I've gotten there yet. One day I hope to have a voice as a musician that people hear and go, "Oh yeah, that's Brewer." Some people are just blessed with the gift of individuality. Others of us have to work for it.

I pay a lot of attention to articulation and what comes from the fingers. And what comes from inside. That's what matters. The gear is my fun hobby. The playing, the music, and the emotion and feeling I want to create and make people feel is the passion. That's the pursuit.

Ed: What projects are you working on now?

Eric: Another solo album. I did one back in 2008. I just recorded myself and it wasn't an outstanding effort by any means. But it was something.

This will probably be instrumental. So that excites me: just the ability to do whatever I can imagine. Whatever I can envision.