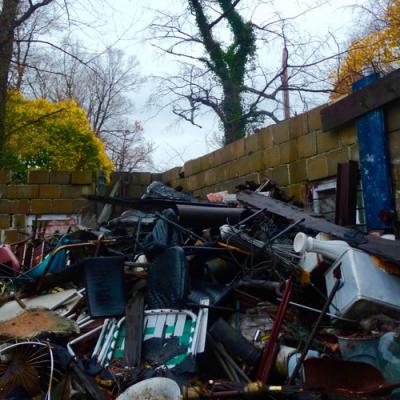 We live next door to the only blighted property in our area. It used to be just a neglected property; but it turned decisively toward blighted when the contents of one of its two collapsed outbuildings were strewn about the backyard by a dubiously-hired day laborer this summer, who never completed the job of junk removal.

So for months, the view out a few of our windows has been of the weather-beaten detritus of a hoarder's life. Lawn jockey. Deer sculpture. Gazing ball. Lantern. Rusty chairs. Decrepit planters. Just-in-case building materials. Broken tools, shovels, hoses. Check, check, check.

Suffice it to say, then, we were quite surprised recently when two dumpsters and a backhoe appeared at the property.

On Black Friday, of all days, removal started in earnest. One man drove the backhoe while two others, ignoring the rain, picked by hand through the remains of the building nearest us, tossing salvageable materials into one pile, and trash into another.

You can probably guess which pile grew larger, by the end.

I made some tea and stood by the window at the top of our stairs. This was good entertainment, by my standards: part historical documentary, part psychological drama, part comedy. And no pesky ads interrupted the program.

Rather than shout over the backhoe's engine noise, the two men sorting through the debris acted out charades for each other, with sweeping gestures aggrandized by layers of outerwear. So I could plainly see their reactions as they shared what they'd found. They'd alternate between showing perplexity with exaggerated head shaking and showing hilarity with uproarious laughter. Mostly, though, they just plowed diligently through the accumulated stuff of a lifetime, and the lifetimes of the homeowner's parents, before him.

Collected, then cared for, then corroded. All of it.

The fact that this junk removal took place on Black Friday endowed it with a certain significance it might otherwise not have earned. Millions of Americans were compelled to be out there at that very moment, buying, buying, buying. All to acquire stuff that would one day end up in landfills, just like the "goods" being carted off next door. Thrown away – whatever "away" is supposed to mean.

Of course, the fact that all of this took place on Black Friday endowed it with a certain significance it might otherwise not have earned. Millions of Americans were compelled to be out there at that very moment, buying, buying, buying. Elbowing each other for "doorbusters," seeking the "unbelievable" savings promised by circulars, clutching coupons for even "deeper" discounts.

All to acquire stuff that would one day end up in landfills, just like the "goods" being carted off next door. Thrown away – whatever "away" is supposed to mean.

Watching the next-door scene, I was reminded of Annie Leonard's 2007 online documentary The Story of Stuff. Leonard talks about the entrapment of consumer culture; how we're ensnared under the guise of being entertained, as what we watch reminds us of all we lack. Eventually, she says, "we're on this crazy work-watch-spend treadmill, and we could just stop."

This isn't a popular notion, in a country where national wellness is measured by national sell-ness.

But even at "Giftmas," as one store calls it, it's worth picturing the dumpster a few decades down the road where much of the stuff bought – and gifts given – will inevitably end up.

If we dared to embrace a radical shift in how we view presents, we might recognize that what we really want from each other is presence.