'Only that day dawns to which we are awake.' 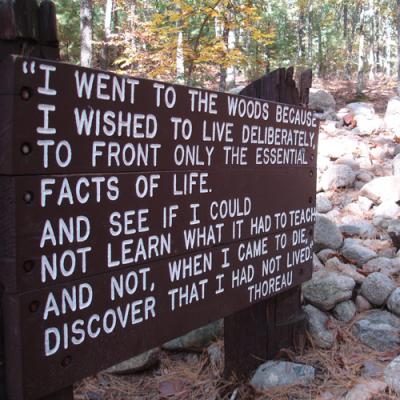 The small pond was completely surrounded by trees, and harbored a beaver dam that'd put these new hotels on the bay to shame. A somewhat secret wooded path led to the pond. I'd plod along it in my duck shoes after crossing through the fence of our back pasture and onto the neighbor's land.

Sitting on a log beside the water, my thoughts were my own, and alone didn't mean lonely. Hundreds of similar places must exist throughout Erie County, whose natural enclosures make you feel as though another world has its arms around you.

I'd take my journal and imagine this Henry David Thoreau guy I'd fallen a little in love with in English class. I developed a soul-deep connection to that quirky, long-lost fellow and have a lot of sentimental journal entries to prove it.

As a teenager, I adored Walden's wealth of rousing aphorisms. Unabashedly inspiring stuff about following one's dreams, being a nonconformist – the sort of life-saving assurances that make for great graduation cards (and even better realities, if we dare to believe them).

I still read Walden, and it still makes my heart pound. It removes the film of everyday mundanity from my eyes. And it bothers the hell out of me in all of the most essential ways, challenging me not to fall asleep in this life.

Thoreau began his famous experiment at Walden Pond on July 4, appropriately, in 1845. He'd built a cabin on Ralph Waldo Emerson's land at the outskirts of Concord, Massachusetts, where he spent two years in solitude and rumination.

Walden can be read as one long declaration of independence. That is, the independence of mind Thoreau longed to see in his countrymen. He called out the jadedness and complacency which had already infested a young America.

Walden can be read as one long declaration of independence. That is, the independence of mind Thoreau longed to see in his countrymen. He called out the jadedness and complacency which had already infested a young America.

He wasn't a hermit, however. Some have called him a fraud for that, as if the fact that he enjoyed some company and support made him a cheater.

But he's advocating independence, not isolation.

It's a distinction our country would do well to remember.

Thoreau sees at the root of society's problems a tendency to settle for limited possibilities, as though no alternatives exist. And his questioning burrows to the purpose of human life itself.

"It appears as if men had deliberately chosen the common mode of living because they preferred it to any other," he writes. "Yet they honestly think there is no choice left. But alert and healthy natures remember that the sun rose clear. It is never too late to give up our prejudices."

Thoreau says that he's speaking "mainly to the mass of men who are discontented and idly complaining of the hardness of their lot or of the times, when they might improve them."

Today, Thoreau may be teased for his enthusiasms; chided for what many would see as his naive contention that if we are willing to question all of our assumptions, we just might get what we want: actual freedom.

With Independence Day just passed, it's the perfect time to let the long light of summer shine into all of the corners of what we take ourselves, our community, and our country to be. And what we each might improve by waking up.

But another thing Thoreau exemplified was the need to season wisdom with humor. When I visited Walden Pond years ago, I wondered if some of his wit remained in the water when I overheard this conversation between a mother and her young son:

Mom: To sit and think about things.

Son: Think about what things?