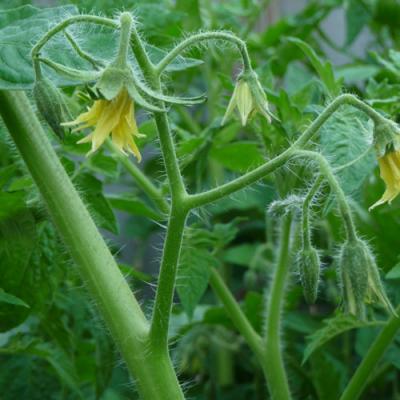 I'm seated on an old milk crate, clippers in hand, at eye level with the enthusiastic branches of nine lush tomato plants. At mid-June, they are the size of plants I'd normally expect six weeks from now, and covered in blossoms. A few tomatoes have even begun to form, their thumbnail-sized green selves pushing past the drying yellow flowers that ushered them into this world.

I'm pruning these vines to get them more sunlight and circulation – two essential elements often compromised by growing them in small spaces like the raised beds we've prepared just for them this year. I pause, enthralled by the vigorous nature of their growth (and also pledging tomato plant allegiance to Johnston's Nursery).

It's been one of those wildly windy, heavily humid days. Hot as Hades and never even delivering on the promise of rain such weather cunningly makes. The air is thick with pollen and poplar fuzz – Erie's greatest democratizing allergens.

I assume my favorite gardening rhythm; one I have to remind myself to maintain, when hurriedness creeps in. I prune off some of the newer shoots on the tomato vines in order to force each plant's energy into forming blossoms and then fruit – into becoming healthier and more productive where it's planted, rather than throwing itself into the "empire building" of vining out all over the place, making life unsustainable for its neighbors, and draining its resources away from self sufficiency. In this garden, there is no such thing as "too big to fail."

Eventually, my husband comes out to see what I'm up to. The gloaming light glows and we find ourselves part of what we imagine to be a universal, timeless scene.

"I'll bet there are a lot of older people all over the world who'd rather be doing what you're doing than identifying the bodies of their children," he says. He's just watched the film Dirty Wars, a documentary about the efforts of journalist Jeremy Scahill to tell the truth about the wars we've all grown accustomed to as background noise. So the reference is less of a non sequitur than it seems.

Today, for most of the population, our wars happen in the abstract. As does feeding ourselves. I bring my attention back to the plants I'm pruning and am immediately grounded in this real moment – an antidote to abstraction.

But it's also what comes up for both of us, puttering around in the garden. My grandfather in North East used to fill the backyard with tomatoes and sell them to processors right there in town. A simple act of making gainful use of the land, much of which was encouraged years before amid the proliferation of Victory Gardens during both World Wars.

Today, for most of the population, our wars happen in the abstract. As does feeding ourselves.

I bring my attention back to the plants I'm pruning and am immediately grounded in this real moment – an antidote to abstraction. The work of my hands connects me to all of those whose efforts the world over will feed their families; all of those since humans first coaxed cultivated food out of this bountiful earth. All of those whose hands have been forced to kill, though they'd rather be nurturing life.