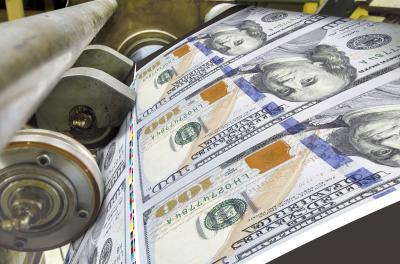 Our restaurant was one of the millions of small businesses that recently applied for the Paycheck Protection Program (PPP) loan. Under the CARES Act, this plan was designed to provide $349 billion in cash flow assistance through 100% federally guaranteed loans to small businesses and 501(c)(3) nonprofit organizations. And if the businesses used more than 75 percent of the loan to pay employees, then the entire amount would be forgiven.

On April 8, the day our bank started accepting applications, we were as prepared as we could have been and made the submission immediately with the help of our loan officer. We were informed it could take up to ten days to approve, but fingers crossed, some of the places were getting them in under 48 hours.

As such, we waited.

We knew we were already behind because the initial launch occurred the week before. But everyone was figuring it all out as they went along. I wasn't concerned. My husband was. A few days before we were discussing one of the clauses in the bill.

We had read that businesses that employed less than 500 employees were eligible to apply. However, (and this is a big however,) there was a clause added later - before the final bill was passed - that businesses that employed under 500 employees per physical location were now eligible (the North American Industry Classification System (NAICS) regulations can be found here). All of a sudden, the definition of small businesses sizably shifted. I wondered how we would compete but was still hopeful there was room for all of us.

Eight days after our submission (and just two days shy from the hopeful approval deadline), we found out the program had run out of money. Up until this point I'd taken things pretty much in stride. I believe as a business owner I need to own whatever happens to the business. Even when it is not in my control. But when the deck is all of a sudden stacked in someone's else's favor, and the rules are rigged, I get a little annoyed.

I had also just finished my dissertation on entrepreneurial leadership for my PhD program. A large part of that dissertation focused on small businesses and how the SBA actually defines small businesses – so I was pretty well versed on the SBA standards to begin with. The SBA defined standards based on the business's number of employees alongside average annual receipts. It all depends on the industry. I can tell you that our type of business "a full-service restaurant" caps out at $8 million in revenue under the SBA guidelines.

So, what became frustrating wasn't that we didn't get it (albeit I was saddened by this), but moreover, some of the businesses that did. Case in point – Ruth's Chris Steakhouse. Ruth's Chris fit the language by employee standards – they have 6000 employees overall - but I don't know any restaurants that have over 499 employees per location.

There was no revenue cap in the bill. If there was, Ruth's Chris would have been light-years beyond the SBA standard. In 2019, the revenue of the restaurant chain was just under $470 million dollars (compared to that $8 million SBA cap). They gobbled up $20 million of that funding.* With that money, one could have funded upwards of six hundred mom and pop style small businesses.

When the government enacts programs that are designed to aid, counsel, assist, and protect the interests of small business, and creates legislation that was aimed to prop up the nation's 30 million small businesses  - and those rules change overnight, it doesn't leave a lot of faith in its wake.

At the time of this article, Congress had just passed an additional $320 billion to this loan program ($484 overall) and President Trump signed it into law. And although this should provide some additional relief to those that hopefully need it the most, we are just kicking the can down the road.

Our national debt is already beyond $24 trillion (which is greater than the economies of China, Japan, and Germany combined) – and this wave of stimulus spending could push debt to record levels - levels that have not been seen since the end of the World War II. And once this crisis (hopefully) passes, the accumulated debt will remain on our balance sheets. The more debt a country has, the more it has to spend to service that debt - and then, even tougher choices will have to be made.

*On April 23, Ruth's Chris publicly stated it was returning the funds. Overall, eight publicly traded restaurant companies were approved for the funds. Two of them, Shake Shack and Kura Sushi USA, had already said they would return the funds. Ruth's is the third such company to follow suit. Five others have also received funds. Rave Restaurant Group received just more than $650,000. All others received at least $10 million.

Rebecca Styn is the proprietor of Room 33 Speakeasy. She is also VP of Ventures at Erie Innovation District and completing her Ph.D. in Leadership and Organizational Learning from Gannon University. Follow Room 33 on Facebook @room33speakeasy, and follow Rebecca on Twitter at @rstyn.