The Blues from a Punk-Rock perspective 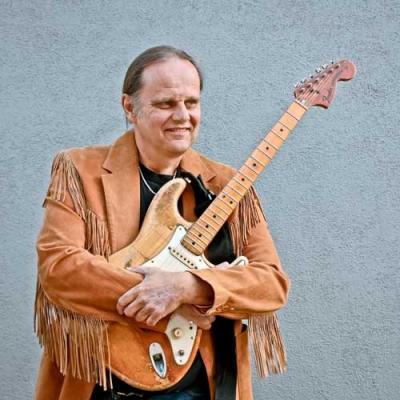 July 9 marked the beginning of this year's 8 Great Tuesdays, with the summer concert series kickoff show headlined by blues guitarist Walter Trout and an opening act by the reggae band Terrance Simian and the Zydeco Experience.  Several thousand people gathered in the Burger King Amphitheater, some standing and some sitting comfortably in their folding chairs, to watch in awe as Trout showed off his mastery in the art of the blues.

There was never a dull moment in Trout's performance.  The majority of the hour and a half that he played was a barrage of unrelenting guitar showmanship, playing a multitude of faced-paced blues that tip-toed along the lines of rock 'n' roll with the occasional slower song thrown in every now and again.

Speaking as a guitarist, I know how physically challenging it can be to be on stage constantly playing guitar for a 30 to 45 minute set, let alone an hour and a half set like Trout did.  With his supreme musicianship and stamina on stage, it's no wonder he was mentioned among Guitarist Magazine's 100 Greatest Guitar Heroes.

Although the blues is a highly respectable genre among guitarists, as well as most musicians and music-lovers, the term "the blues" is often a turn-off to a younger generation.  They might see it as their grandparents' music and think of it as dull or boring.  But Trout's lightning fast picking and rapidguitar solos give his version of the blues more of a rock 'n' roll vibe – a pill which is a much easier for a younger generation to swallow.

There aren't a lot of people around today who remember a time when the blues was considered a defiant, rebellious style of music.  It even used to be called "the Devil's music."  While watching Trout's performance, I couldn't help but relate my musical background in the punk scene to the early days of the blues.

It's easy to see how far the blues have come.  It was one of the key influences in the birth of rock 'n' roll and jazz, both of which developed into countless other genres of modern music.  So it's safe to say that without the blues, most of the music made over the past 60 years wouldn't exist.   The growth and development of the blues has allowed musicians like B.B. King, Stevie Ray Vaughn, and Walter Trout to achieve great success.  But when the blues was in their infancy, and even several decades after that, they remained mostly underground and considered a decadent style of music, listened to only by those in the working class on the spectrum of society.

In my opinion, this is an excellent reflection of punk rock.   Like the blues, punk was –and still is in some cases – considered vile and only listened to by degenerates.   It was rebellious, dirty, fast, and challenged the status quo.  And like the blues did to rock 'n' roll, punk was a key ingredient in the formation of the extremely popular grunge movement of the early to mid-'90s.   Kurt Cobain even attributed his influences not only to punk bands of the '80s, but also to the early blues artist Lead Belly.

Just as the blues have influenced music styles that now enjoy mainstream acceptance, punk and punk-influenced artists have also been able to reach a wider audience. Bands like Green Day, Blink 182, Good Charlotte, and Sum 41  have even been able to achieve commercial success.

The impact that the blues have had on music is immeasurable to say the least.  Everyone can and should appreciate that.  It also helps that blues musicians like Walter Trout are freaking incredible.  I'm used to small venues with five or six bands playing sets that rarely exceed 45 minutes, so I went to the Burger King amphitheater feeling a little out of place watching two bands play hour and a half sets.  But even I was finding myself sad when it was over, wishing he could play just a little longer.