As Bandcamp temporarily waives its fees, grab some homespun music

by Nick Warren
View ProfileTwitterInstagramRSS Feed
May 1, 2020 at 2:45 PM 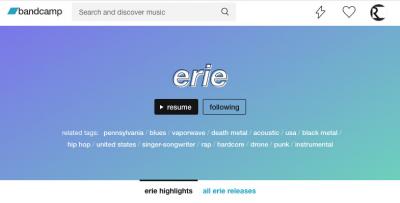 bandcamp.com/tag/erie
One excellent way to find local music is to simply look at the tag: Erie

The COVID-19 pandemic has had life-changing effects all throughout the economy. As unemployment claims reach record numbers state and nationwide, people are finding themselves out of work and unsure what to do.

Musicians have long lived in this uncertainty. You know how the phrase "gig economy" has become commonplace? They invented it.

As social gathering capacities have capped, things look grim for live music fans even in the Green phase. Thankfully, musicians are innately creative. Livestreams have become a regular fixture of our social feed, and we're all hard at work trying to MacGyver ways to collectively enjoy the music that we love.

One way to support these local musicians that you love is easy.

One place to do that? Bandcamp.

The company was founded in 2008, and has since become one of the key places to find and buy music directly from the artist. With a relatively easy point-of-entry, it lets creators upload their own tracks and set a price for their fans. Often, artists will offer their tracks up for free, or for preview on the site. Bandcamp also functions as a merchandise storefront for many artists, letting them set up orders for physical media as well (tip: it's usually the best way to get those limited edition pre-orders as well, as the site will even tell you if there are a finite amount of copies left).

"Bandcamp is a great service even without the fee waiver," explained Adam Holquist, who uses the site for projects ranging from onewayness and The LEC. "For the artists who use it, it's one of the best ways of passing the most money on to them. Services like iTunes or Amazon, artists are seeing maybe 40-50% of the money you spend on them. And streaming is barely worth even mentioning," Holquist noted. "Bandcamp only takes 15%, which I've always felt was pretty reasonable for the service they provide."

On March 20, they waived their fees. People came out for that, spending $4.3 million in one day.

That's 15 times more than a regular Friday (which is the designated day for a vast majority of album releases).

They're doing the same on May 1.

And June 5, and July 3. On the first Friday of the month, the site is waiving their take, letting all of that money go to the artists who need it until midnight PDT.

"That 15% extra may not seem like much, but it's a nice gesture on their part when so many artists are financially hurting," Holquist admitted.

"It may sound simple, but the best way to help artists is with your direct financial support," said Bandcamp co-founder and CEO Ethan Diamond, adding that "and we hope you'll join us through the coming months as we work to support artists in this challenging time.

Though this is in no way a complete list, here are over 50 local names you might recognize (with a healthy mix of old and new) who have easy-to-donate-to pages on Bandcamp:

Over 200 offerings available, generally as individual tracks of covers and originals

Seven releases including their 2017 album Crescendo.

A collective featuring over 40 releases from different artists

Four releases, all with CD options including 2019's Reset

Five releases including the 2016 full-length It's Drowning Out. (read the review)

Maddock // It's Drowning Out

Six releases including 2020's Scintillations of the Inner Light

Seven releases including the 2017 EP The Optimist.

Three releases including 2014's I Keep It Moving (read the review)

by Nick Warren1/4/2017, 12:30 PM
Let The New Morning Sunrise be a warbling soundtrack to your dark and stormy nights.

Five releases including the 2019 full-length My Gasoline Heart

by Nick Warren10/23/2019, 11:15 AM
An album just begging for a singalong, My Gasoline Heart offers a steady burn that stays with you

Seven Releases including Some Sad Songs and more sad songs

Three releases including the new single "Thrills" and the 2017 full-length The Art of Love.

Optimistic Apocalypse // The Art of Love

Three full-length releases all worth revisiting

Their 2019 Demo along with merchandise

Two releases including 2019 full-length The Arrival

19 releases including eight from 2019 alone

Who the Heck is Teddy Rankin?

2019 EP Drowning In The Will of Others

With nine releases like his latest, The Future Looks Mighty Ole Timey, including a discounted discography bundle.

Four releases like their Over Under EP, as well as a merch tab with shirts, hats CDs and cassette tapes. (read more about the band)

Sitting Down with The Standby

by Aaron Mook9/11/2019, 11:30 AM
Following the release of their latest EP, the local alternative trio look ahead

Four releases and a merch page from the former Erie Band

Three releases including the 2016 single "Be Your Babe."

Eight releases including a preview of their newest full-length album

Two releases including the 2019 EP Terra