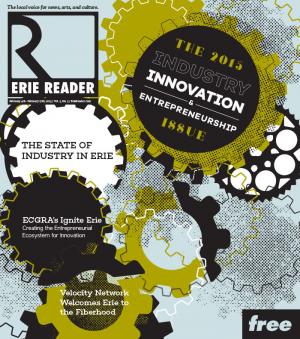 Street Corner Soapbox: The Paths Forward and What It Takes to Become Innovative

They Changed the Rules: Rebels with a Cause

by Mary Birdsong2/4/2015, 7:10 AM
A group of Davids pulled their slingshots taut and took down the Goliath of big business, special interests, and government.

Explore the biases of the break-up with The Disappearance of Eleanor Rigby: Him and Her

by Alex Bieler2/4/2015, 6:50 AM
The ECO is providing some extra star power to its usual sonic excellence, providing a wonderful opportunity to enjoy one of the world's finest composers.

by Ben Speggen2/4/2015, 6:40 AM
Creating the Entrepreneurial Ecosystem in Erie

The State Of Erie Industry

by Alex Bieler2/4/2015, 6:20 AM
The talented sextet of hirsute hooligans may not hail straight from the Emerald Isle, but you couldn't tell from the group's high-energy Irish jams.

Velocity Welcomes Erie to the Fiberhood

by John Lindvay2/4/2015, 6:10 AM
Erie Could Become the First City in Pennsylvania to Have Gigabyte Fiber To The Home

by Ryan Smith2/4/2015, 6:00 AM
Docksider is serving up a healthy dose of funky, deep-groovin' sound, soaked in sun, drenched in good vibes, and straight beaming with socially-conscious positivity – just what we need to get us through a couple more months of these long, cold, dreary winter nights.

by Chris Sexauer2/4/2015, 5:50 AM
LEAF hosts its tenth annual Winterfest, a celebration of all things snowy and outdoors.

Fringe Fest 2015: Gannon University's Annual Theater Festival is Back and Biggger Than Ever

Richie Cole Brings His Playful and Energetic Jazz to Anchor In

by Erie Reader Author2/4/2015, 5:30 AM
Cole's stage attitude is casual, playful, and energetic, and says swing, swing, swing -- that's so, whether he's doing a ballad or love song or an up-tempo be-bop classic or a Cole Porter or George Gershwin standard or a simple, even corny (by jazz standards) pop song, past or present.

The Totally Out-there Fusion of Progressive Rock, Jazz, and Funkability Featured on One Damn Fine Fiddle

by Sara Toth2/4/2015, 5:10 AM
To describe The Intergalactic Nemesis – Target Earth: A Live Action Graphic Novel is to attempt to describe many things. Here's what it's not: boring.

by Erie Reader Author2/4/2015, 4:50 AM
A sharp, high-energy sound that is exciting but sometimes jarring.

by Alex Bieler2/4/2015, 4:40 AM
Coming from a group that has dabbled in verbose musings into anything from Japanese folk tales to sea shanties, a simple, more relaxed release almost seems odd, but the results generally work.

The Punch Brothers // The Phosphorescent Blues

by Alex Bieler2/4/2015, 4:30 AM
A deftly crafted album that's both immensely detailed and delicate.

by Pen Ealain2/4/2015, 4:20 AM
Confronting Injustice: A Woman's Voice Challenges Viewers to Consider Wrongs of Society and What We Might Do to Affect Change

Geeked Out: The Future of West Erie Plaza Theater and the Role of Film-based Entrepreneurs in Erie

ER Sports: Looking Back On One of the "Greatest Games Ever"

by James R. LeCorchick2/4/2015, 4:00 AM
A look at  the legendary – not only in Erie but nationally – basketball game between Youngstown State University and Gannon College.

From The Editors : The Industry, Innovation, and Entrepreneurship Issue

by The Editors2/3/2015, 7:30 PM
We welcome you to the Industry, Innovation, and Entrepreneurship Issue, what will become a perennial look at the climate of industry in Erie.