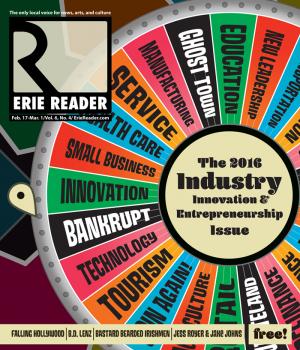 A Spotlight on Local Companies

by Ryan Smith2/17/2016, 6:45 PM
These are just a handful of the innovative local companies that help to shape the Erie area's commercial/industrial landscape.

Super Plurtendo at PACA is a Nintendo Lover's Dreamworld

by Matt Swanseger2/17/2016, 6:30 PM
Rescue yourself from the winter doldrums and peel back the years at PACA before it's too late.

by Nick Warren2/17/2016, 6:15 PM
Dust off those dancing shoes, because it's time for another fun night with the loveable quartet.

by Brianna Lyle2/17/2016, 5:45 PM
With nominations now open for the 2016 class, these three alumni continue to be great examples of local leadership.

by Lisa Austin, Civitas2/17/2016, 5:15 PM
Arts revive and hone our humanity, contribute to social interactions, foster innovation, and attract and retain human capital to the region, thus enriching our economy.

by Sara Toth2/17/2016, 4:45 PM
Dark comedy is the phrase that best comes to mind with Samuel D. Hunter's Boise, set to begin its run as part of Dramashop's Mainstage series.

B.D. Lenz Delivers Virtuosity and Versatility at the Anchor In

by Matt Swanseger2/17/2016, 4:30 PM
New Jersey's B.D. Lenz will join Erie's own Frank Singer on guitar for three hours of laid back grooves in the cozy confines of the Oasis Pub's understory.

A Review of Fluidity of Gender: Sculpture by Linda Stein

by Gregory Greenleaf-Knepp2/17/2016, 3:45 PM
Drafting a superhero "born" during World War II to her cause, a New York artist explores male/female roles and expectations.

Erie At Large: Fishing for free riders: unions after Friedrichs.

by Jim Wertz2/17/2016, 3:00 PM
Friedrichs v. California Teachers Association, the Court was asked to consider whether or not union fees, known as "fair share" or "agency" fees, violate the First Amendment.

Spike Lee's Chi-Raq Offers an Audacious, Ambitious Look at the World We Live in

by Katie Chriest2/17/2016, 1:15 PM
Smart innovation makes thoughtful use of what we already have.

by Matt Swanseger2/17/2016, 1:10 PM
The Junior Boys' fifth album is a welcome reminder of the depths synthesized music can reach – without necessarily blowing out your subwoofers.

by Nick Warren2/17/2016, 1:08 PM
Take a nice respite from the cold February weather, grab a drink, and warm yourself up to two of the best songwriters in the area.

by Ryan Smith2/17/2016, 11:55 AM
On Friday, Feb. 19, Bastard Bearded Irishmen bring their musical rampage back to the Kings Rook Club, setting up for what's sure to be an evening of good-timey debauchery.

Is The Holy Mountain the strangest movie ever made?